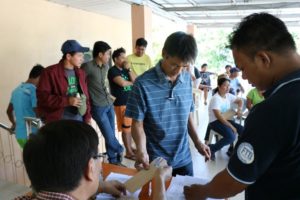 The first leg of distribution was done at Malacampa Barangay Hall for recipients from Malacampa and Sta. Maria with the enthusiastic cooperation of Barangay Chairman Julio F. Caoagdan.

The last batch of subsidy distribution was at Pilpila Covered Basketball Court ably facilitated by Barangay Chairman Elarde M. Dancel who took pains in locating recipients who were late in claiming their subsidy.