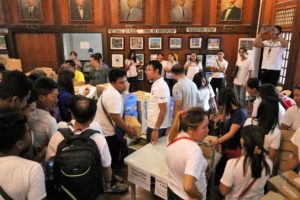 After the program preliminaries, TESDA Tarlac Provincial Director Liza Manio, in her opening remarks, reiterated TESDA’s mandate to get all skilled workers of the country certified.

This is in preparation for the implementation of the Association of South East Asian Nation (ASEAN) Economic Integration, the PD revealed.

She also warned those present that in the ASEAN, competition will be intense and the need to be in one’s toes has never been more urgent.

PD Liza ended her message with a profound definition of luck as, “The intersection of preparation and opportunity.”

The Honorable Susan Yap, in her special message, revealed that Tarlac is in the process of becoming the home of national government agencies with the completion of Clark’s Green City and the eventual transfer of the government’s head offices.

She also hinted at the eminent transfer of Manila International Airport to Clark and the ship docking and container yard facilities from Manila to Subic, Zambales.

The good governor outlined the multiplier effects of these transfers especially in the construction sector with the Green City alone in need of around 7,000 skilled workers to build it.

The Tarlac Governor revealed her fervent desire to get more Tarlacqueños fill up the projected job vacancies especially in the construction and service sectors.