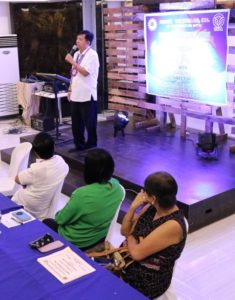 TARLAC CITY, Tarlac – TESDA III Regional Director (RD) Dante J. Navarro met with the Presidents and Administrators of Tarlac Technical Vocational Institutions (TVI) in a move to gather momentum and power up for the second semester delivery of Technical Vocational Education and Training (TVET) at La Majarica Hotel, Tarlac City, Tarlac on May 3, 2018.

After the program preliminaries TESDA Tarlac Provincial Director Elizabeth D. Manio introduced the guest of honor and speaker as her former colleague at Landbank of the Philippines and as a humble and decisive leader.

RD Dante, in his address reiterated the need to change and to cultivate a sense of ownership as a member of society.

He emotionally recalled the murder of his grandparents by drug addicts as a turning point in his life and the fire that keeps pushing him to sustain his advocacy against crime and poverty.

He regaled the audience on President Duterte’s life of simplicity and quite heroism that drew him to support his drive to reform the Filipino from the inside.

He also elaborated on the need for a federal form of government to hasten the transformation of the economic condition of the people and strengthen the advocacy for equality.

His life story is also an eye opener to those present when he recalled a life of poverty with only his grandparents to rely on.

In his formative years, the RD hawked newspaper, comic magazines, and other street goods, worked as jeepney terminal barker, and trained himself to only eat rice in order to survive in case his elderly grandparents die early.

These hardship early in life spurred him to fight for his rightful place in the sun which started to shine when he was admitted as a Bachelor of Science in Applied Economics scholar at Polytechnic University of the Philippines.

Three days after graduation he applied at Landbank and three days later was hired.

Landbank then sent him to La Salle to study Computer Science which led to a Master of Science in Mathematics Teaching and a Master’s Degree in Accounting.

Two Bachelor’s degrees, two Master’s degrees, and the murder of his grandparents led him to found Alay Tanim which as a member non-government organization (NGO) of Confederation of Civil Society led him to get elected as President of Bulacan NGOs.

This brought him to the attention of the then Undersecretary of the Department of Transportation and Communication (DOTC) Guiling A. Mamondiong, who later founded and ran as Party List representative of Bayani Party with him, RD Dante, handling the social media campaign machinery.

This strategy later became a sort of template for the Duterte run for Presidency.

RD Navarro also strongly pushed for use of green TVET, even urging TVIs to make their student’s uniform a shade of green.

He also acknowledged the contribution of the indigenous communities in the preservation and protection of nature hence the launching of the National Integration Scholarship Program (NISP) to speed up the integration of Indigenous Peoples (IP) in the economic life of the society.

The RD further revealed his difficulty in meeting and knowing each TVI better and requested that in lieu of individual meet ups, TVIs provide him with their profiles, list of accomplishments, and actions photo and videos of TVET delivery.

After his speech, the RD proceeded to Diwa ng Tarlac to meet and invite Tarlac Governor Susan Yap to the groundbreaking of the first TVET court in the country to be built in the five hectare lot donated by the Local Government Unit of Capas at Cristo Rey.