TESDA Director General Embarks on a Marathon Consultation with Stakeholders 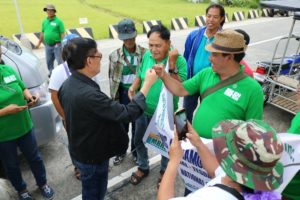 TARLAC CITY, Tarlac – TESDA Director General (DG) Guiling “Gene” A. Mamondiong launched his what proved to be a, “Four-day marathon consultation with stakeholders in the provinces of Bulacan, Pampanga, Zambales, Aurora, Quirino, and Nueva Viscaya,” at the Bulacan Provincial Office at Guiguinto, Bulacan on April 6, 2018.

The event was witnessed by Presidents and Administrators of Technical Vocational Institutions and employment locators of the surrounding regions.

The DG praised the leadership and staff of TESDA Bulacan for their commendable performance in promoting Technical Vocational Programs and coordinating their employment afterwards.

He assured them of his attention and assistance in sustaining the gains achieved in job placement of technical vocational graduates.

Secretary Mamondiong in his message, reiterated President Duterte’s (PRD) commitment to uplift the economic condition of the nation’s indigenous peoples (IP) through the provision of free technical vocational education and training (TVET) and facilitation of job placement.

Having been made aware of the dire lack of space and its negative impact on customer satisfaction at TESDA Pampanga Provincial Office, hence the planned refurbishment, the DG pledged 3M initial capital outlay to start the project.

He sadly noted though, that per inspection report on scholarship program, issues regarding implementation were most notable in Region III.

On the same note he assured that Technical Vocational Institutions (TVI) found to have shortcomings in the implementation of the scholarship program will be given the chance to explain themselves.

RD Navarro, on the other hand, pleaded for skills training for Dumagats and other indigenous peoples (IP) of Norzagaray, Bulacan, citing the fact that these minority groups are the guardians of Angat dam.

TESDA Tarlac Provincial Director (PD) Elizabeth D. Manio was also the recipient of the DG’s advocacy in the form of a 2.5M training fund for IPs of Tarlac to be implemented as soon as the Memorandum of Agreement (MOA) between TESDA and the community is signed.

In her message, the lady Administrator emotionally thanked the TESDA DG for encouraging her to stay the course when the going got really tough in her early days with SBMA.

In her message, she envisioned an SBMA where all workers are TESDA certified and preferably conversant with any or all of client language and culture, e.g. Mandarin, Korean, or Japanese.

In his response, the TESDA DG exhorted the lady Chair for toughing it out and revealed the Presidents Duterte’s (PRD) advocacy in bringing the areas IPs up to the economic standard of the area by providing them with free inclusive technical vocational training, food and transportation allowances, and holding restrictions on educational attainment in abeyance.

DG Mamondiong also reiterated the need to nationalize the employment of trainers and assessors thereby ensuring their constant availability for training delivery and assessment.

During the Aurora stint of the consultation, the DG was enthusiastically escorted in to Baler, Aurora by members of the MRRD Aurora Chapter.

During the consultation, DG Gene informed the stakeholders of PRD’s advocacy for the IPs of Aurora to which the Aurora MRRD members received with jubilation and in response enthusiastically revealed their fund-raising effort to finance their attendance to this year’s MRRD Summit.

The DG promptly instructed them to stop the fund raising and promised them that he will facilitate their attendance to the said summit.

He also revealed that an MRRD led medical mission will be conducted in their province with TESDA facilitating the provision of medicines, and sometime later, after consultation with Department of Foreign Affairs Secretary Cayetano, supported by a letter of request from MRRD Aurora Chapter, a mobile passport services will be provided.

The main concern of Aurora TVIs is the encroachment of other provinces in the provision of special commitment funded training thereby reducing the pool of potential recipients for Aurora TVIs.

RD Navarro interjected and reiterated that need for timely appraisal of training delivery for both provider and recipient provinces in cases on inter-provincial delivery.

The RD also required PDs to maintain a segregated bulletin board of ongoing trainings and their respective providers for public reference.

The RD will also consider transferring the approving authority for Mobile Training Program (MTP) delivery to his office to ensure equitable Implementation.

Relative to that, RD Dante also contemplated on having PDs negotiate with sponsors into reallocating their special commitments in cases of congestion.

DG Mamondiong also tasked RD Navarro to work on the new site donation and effect the relocation of Provincial Training Center (PTC) Aurora with dormitory to a more accessible location.

RD Dante is also to make a request for 20M allocation for PTC and another 20M for the dormitory from Senator Sonny Angara.

A request for Senior TESD Specialist plantilla for PTC Aurora and doubling of manpower compliment for the Provincial Office is also to be sent to the DG’s Office.

During the consultation with the Quirino province stakeholders, DG Mamondiong informed Governor Junie Cua of PRD’s preferential program for the IPS of the province.

The DG expressed dismay on the paucity of TVET Institutions in Quirino and revealed plans for a PTC Quirino funded by the National government starting 1st quarter of 2019.

The Secretary also instructed all concerned to hire and train trainers form IP sectors to address the need to tailor training needs for IPs.

He also dangled the provision of a TVET training court for the LGU with the greatest number of IP residents, subject to the recommendation of the PD.

The Secretary exhorted the PDs in attendance to enjoin the local elected leaders to provide support for the construction of Nueva Viscaya Provincial Training Center and Dormitory which prompted Governor Cua express his support to the proposed project.

During the dialogue, the TESDA Cagayan PD suggested that impounded smuggled cars be donated to TESDA Technology Institutions (TTI) with Automotive sector programs to which the DG directed the requesting PD to write to PRD to that effect.

PD Ronald Ibay on the other hand suggested that indigenous practices be accredited and certified and that assessment be demand driven to which the DG encouraged him to request for policy change.

The Secretary also considered signing a MOA with the LTO to facilitate the training delivery of Driving NC II for provinces with no LTO accredited driving school.

DG Mamondiong also emphasized that IPs are exempted from the educational requirement of the scholarship program.

During the consultation proceedings with each province’s stakeholders, having acknowledged that while challenges and solutions differ from province to province, the TESDA Secretary always emphasized the improving conditions under PRD and left assurances that these issues, e.g. Drug addiction, Criminality, Corruption, and Poverty, will all be effectively addressed under the federal form of government.