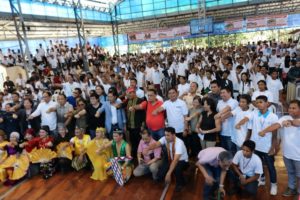 TAGUIG, Metro Manila – TESDA Director General Guiling A. Mamondiong announced the provision of a National Integration Scholarship Program to an audience of cultural minorities and Indigenous Persons (IP) from Regions III, NCR, and IVA at the TESDA Central Office covered court on February 23, 2018.

The program aims to empower indigenous peoples and cultural minorities through Technical Vocational Education and Training (TVET) and promote peace and order through the reintegration training for rebel returnees.

Representatives of Muslim communities lauded the President’s move as the most effective way to combat extremism in the country.

In his message, Director General Mamondiong assured the participants that the activity is just a beginning of a massive and intensive campaign to bring them to the forefront of economic development.

DG Mamondiong also revealed that he himself is an indigenous person as Maranaos are members of Higaonon tribe who embraced Islam but retained and continues to practice their indigenous culture.

TESDA Tarlac sent 43 Indigenous Persons from the Abeling tribe to participate and represent the other cultural minorities in the province.

After the DGs speech, representative of various sectors and tribes signed the Manifesto on Skills Development.

After the break, a showcase of cultural presentations by participants from various sectors and tribes kept the jampacked place entertained.

This was followed by an orientation on TESDA Scholarships facilitated by specialists from the Central Office.