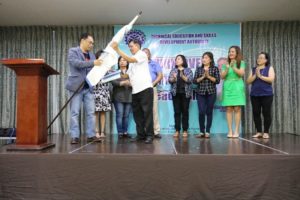 After the program preliminaries, the incumbent TESDA III Regional Director Andrew A. Bido who requested to speak first, began his turn over speech by liking the region to a Boeing 747; less effort to fly but more complicated in handling.

Director Bido assured everyone present that the incoming Regional Director is a more able pilot than him having served in various capacities with government agencies that directly serve the masses.

The outgoing RD also expressed excitement to be reassigned back to his home region of Region 8 where he plans to immerse himself in uplifting the economic situation of his fellow Warays through Technical Education and Skills Development (TESD).

Dr. Marcelo V. Fernandez, PhilTVET President, thank the outgoing RD for his proactive recommendations on how to make TESD more responsive the needs of the recipients and training providers.

Gregorio “Bong” Sison, Central Luzon TVI Foundation, in his message regaled the audience on RD Bido’s brutal honesty in getting to the roots of difficulties he encountered during his incumbency.

Zambales Provincial Director Ben-Hur B. Baniqued praised RD Bido for his energy and enthusiasm despite being a neophyte in the TVET Sector. PD Ben also expressed regrets that the good RD was transferred too soon and exhorted his fellow TESDAns to nurture the cooperation and respect as a legacy of past RDs.

PD Ben also threw down the challenge to his colleagues to rise respond to the call of the ASEAN’s Mutual Recognition Agreements.

As the incoming RD Navarro bid farewell to his Region II staff, some of them were visibly moved when he acknowledged their invaluable assistance him.

RD Navarro introduced himself to his new TESDA family as a poor newspaper boy who dreamed big and studied and worked hard.

RD Dante also revealed that he used to be a staff of Speaker de Venecia and a long-time friend of TESDA Director General Guiling A. Mamondiong.

He also expressed great admiration to the accomplishments of DG Mamondiong, as DOTC Undersecretary and as one of the ardent proponents of Mayor Rodrigo Roa Duterte National Executive Coordinating Committee (MRRD NECC) before his appointment as TESDA Secretary.

RD Navarro also hinted on the new direction for the Agency. While Technical Vocational programs will still make up the bulk of its core business, the move to diploma programs will be given greater emphasis proportionate to the relegation of certificate programs to the Department of Education.

In parting, the new RD revealed that over 2 billion pesos have been allocated for the 2018 Training for Work Scholarship Program (TWSP) and DG Mamondiong and President Duterte expect results.